Self Hosting a Google Maps Alternative with OpenStreetMap

No, it's not! Google Maps is probably the most amazing service we get for free1 It's something I use almost every day and is incredibly useful for getting around.

But what if I didn't need Google at all?

OpenStreetMap provides crowdsourced mapping data available for free to the world. But this isn't to say I can just use OSM. The organization does provide the data, but its usage policy encourages users to not rely on their servers for personal use, and instead take responsibility for hosting themselves. And based on this project, I can see why. The hardware requirements are not for the faint of heart.

I had access to a gaming PC that was mostly unused. These days my girlfriend and I prefer to play couch co-op games on the Switch, rather than on PCs in separate rooms. So I thought I'd make use of this fairly beefy desktop and turn it into a self-hosted map server.

This particular desktop2 has:

It cost $1,270 when I bought it (open box) from Microcenter about two years ago.

To meet the demanding requirements3 for running a map server for the entire planet, I also bought 128 GB of RAM to replace the 32 GB it came with. This brought the total hardware cost to $1,670.

This is quite a large price for self-hosting, but it should be noted that the requirements are roughly proportional to the geographic boundaries of the data. If you wanted to self-host a map service for a smaller region (a European country or a few US states), this could be accomplished with a much more modest computer.

In the end, I compromised and lowered my expectations to only hosting the map data for North America.

What does it take to match Google Maps? In my mind, there are 3 main requirements:

These can be solved with 3-ish services:

To accomplish this, I set up a github repo to group together these core services and run them using docker-compose.

This repo can be found here.

It was surprisingly easy to piece together these dockerized services in a single docker-compose.

The READMEs for these services suggest creating a separate docker volume before starting the containers. This is useful because the import can take a very long time (multiple days for the whole planet).

I initially tried to import the entire planet.osm.pbf file, which is currently 66 GB. However, the import kept crashing, so I limited the scope of my project to only use data in North America. If I need to travel abroad anytime soon I'll just have to use Google Maps.

The North America extract is only 12GB in its compressed protobuf format, so I was able to run all 3 services on this data.

Remarkably, the services extract this data into a much more verbose (but more read efficient) format.

To see how much final disk space was being used, I ran:

From the output, it was clear why I couldn't import the entire planet.

Even on this smaller extract, these services already use a large portion of my 1TB SSD (667 GB total). Assuming the usage scales proportionally, I would need around 3.7TB of storage for the entire planet. Not to mention the RAM requirements also scaling.

I also made some modifications to the Valhalla webapp7 to improve the mobile layout with a more responsive UI. These changes got upstreamed into the main repo! Open source is amazing.

I also changed the backend services being used, to avoid putting demand on the official OSM servers and instead, make the requests to my own hosted instances.

This demo can be found here: https://map-demo.wcedmisten.dev 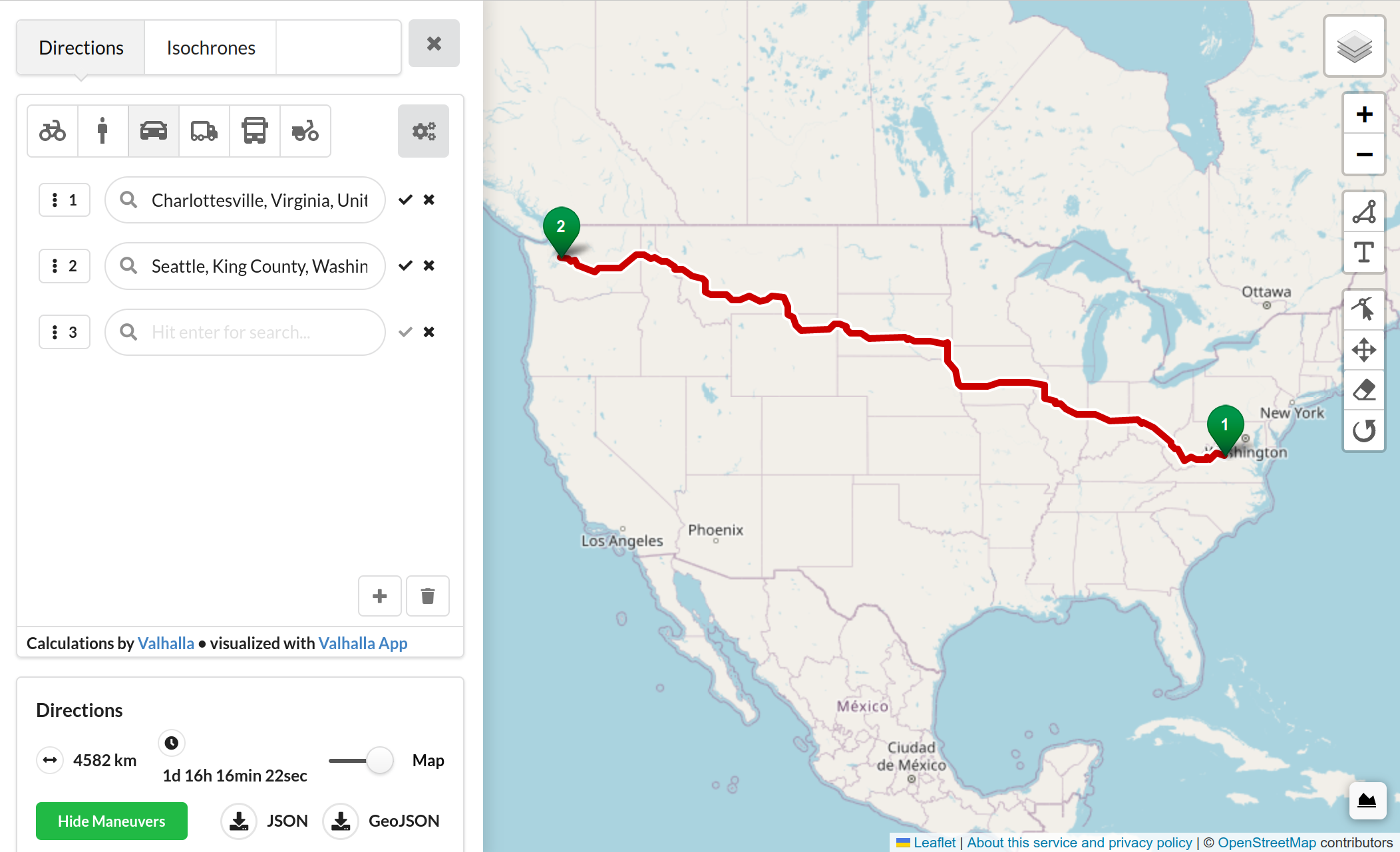 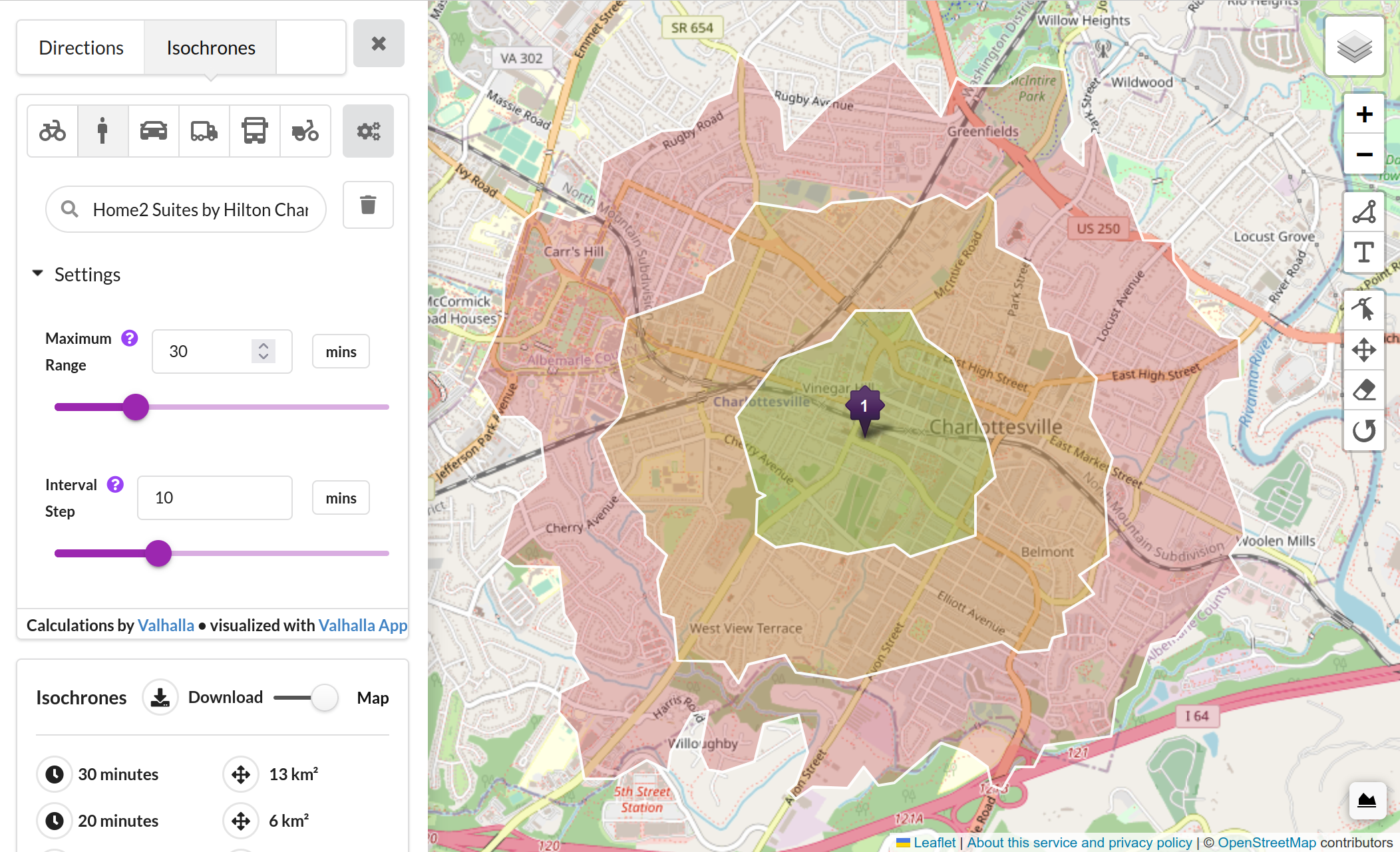 To actually serve traffic outside my local network, I had to set up some additional configurations.

Because I don't have a static IP address through my Internet Service Provider, I needed to use a Dynamic Domain Name Service client, which updates my DNS records to point at the current IP address of my router. Since it's not static, my ISP occasionally will reset the IP address allocated to me. I used ddclient. This provides less reliability than a static IP, but it's good enough just for my hobbyist development server.

To serve traffic at different subdomains like maps.wcedmisten.dev, I set up Nginx to send traffic to each subdomain to the correct port as configured in docker-compose.yml. I also used the certbot command to automatically generate a certificate from LetsEncrypt for each subdomain and update the Nginx config. This part was also pretty seamless.

This part of /etc/nginx/sites-available/default looked like this before running certbot, which added a bunch of additional config to handle https.

Finally, to get external traffic from the internet connected to my computer (and specifically to Nginx), I had to set up port-forwarding on my router. The Netgear admin interface shows each device connected to the network, so this was just a matter of forwarding port 80 (HTTP) and port (443) to the computer. This part was much easier (and less scary) than I expected.

It takes a lot of memory to handle running a rough alternative to Google Maps, but it's still technically feasible with consumer hardware and with a good amount of disposable income.

As of writing this, Google Maps waives the first $200 of Maps API requests every month8. It also allows for unlimited use of the embedded Google Maps API, which shows an interactive map on a website. However, this is only unlimited for web use. The pricing for iOS/Android is $7 / 1,000 requests.

With some rough napkin math, we could assume each visitor using the webapp will search 2 places (geocoding), load the embedded map view, and make a routing request. This would mean each 1,000 visitors would use $15 of API credits.

In order words, the free tier could support around 13,000 visitors per month, assuming minimal app usage for each visitor. After the free credits expire, each visitor would cost $0.015.

Assuming the purchase is amortized over two years (that's how long I've had it):

"Self Hosting" in the Cloud

Based on the cheapest instance that matches my own PC's specs. These comparisons aren't quite apples to apples because of other considerations like egress costs, but I think these numbers should be close enough for napkin math.

Self Hosting vs. Google Maps API

It seems clear that in terms of raw cost, self hosting on my own hardware is way cheaper than using cloud compute. Of course, this isn't apples to apples. Cloud buys a lot of things that running a machine in my closet doesn't afford: backups, IT expertise, on-call support, help desk, etc. But as a hobbyist that's a fine tradeoff for me. I'm trying to learn more anyway, so those are almost benefits.

But what about Google Maps API? It would allow for 13,000 visitors per month just on Google's free credits! That's a lot of traffic. When does it make more sense to self-host on my hardware?

I'm fairly confident my machine could handle that much traffic.

The issue with comparing these numbers is the same as with comparing self hosting costs directly to cloud compute costs. The nuance is in the value that Google Maps brings: expertise, scalability, and proprietary map data.

But for hobby projects like this one, I think self hosting clearly makes sense.

Even for professional applications, it's worth doing the math. With docker, installing these services has been greatly simplified, even if it takes some time.

The assumptions here also assume a very light API load on the map. If we are assuming heavier use of the map services, the tradeoff may be even sooner. Especially with an application requiring batch processing of large datasets.