Walkability is the quality of a neighborhood that allows pedestrians to accomplish everyday tasks like collecting groceries, visiting restaurants, and attending doctor's appointments, all on foot.

There are many ways to measure walkability, including intersection density and by measuring the distance to urban amenities. The most notable metric for walkability is Walk Score, which is owned by Red Fin. They use a proprietary system for this metric, but ultimately their methodology1 is based on the distance to amenities, similar to the one I will explore today.

Isochrone maps are a way to visualize the area that could be reached from a starting point in a given time. These distances appear as contours originating from the starting point, showing bands across which the travel time is equal.

The main idea of this project is to examine how not just density, but also the structure of roads and sidewalks impact walkability. For instance, compare these two pedestrian isochrone maps showing the destinations possible in 15 minutes of walking:

Even though there are clearly fewer amenities near this rural area, the network structure of roads also prohibits covering as much distance, not to mention the lack of sidewalks facilitating safe pedestrian travel. The city block structure in Manhattan provides a 30% increase in the walkable area from the starting point, compared to the rural area.

To construct isochrone maps, we'll be using a tool called Valhalla, which is an open source routing engine. This tool operates on top of openstreetmap data, which is crowdsourced by volunteers, but is generally quite thorough, especially in urban areas.

First I downloaded the openstreetmap data from Geofabrik,2 which graciously hosts up-to-date extracts of openstreetmap for download.

Initially I used an extract specifically for Virginia which was a modest size of 342 MB. But after this code was tested, I ran imported the entire United States extract, which is 8.5 GB.

Then I copied the data to data/data.osm.pbf

Setting up Valhalla and PostGIS

I used docker compose to manage Valhalla and PostGIS so that I didn't have to install it locally.

For Valhalla, this docker compose file just exposes port 8002 for the API in addition to some volume mounts for the run script and the OSM data.

Combined with a simple bash script to build the Valhalla tiles and run the server:

The full code can be found here.

PostGIS is a geospatial extension on top of PostgreSQL, which does some very cool optimizations to support efficient geospatial queries.

Similarly, I set up PostGIS using my osm2pgsql-docker repo and imported the US dataset with osm2pgsql, a tool used for ingesting the protobuf formatted data into PostGIS.

After PostGIS was running, I imported the data. This was initially tested on the Virginia state osm.pbf data, but I later updated this to use the entire US dataset. After making this change, the script kept running out of memory. So I added the --slim --drop flags, which process the data using PostgresSQL (using my SSD), rather than storing everything in memory. Although I was running this on a 16 GB machine, I did not have enough free memory to process for the whole file.

I also used a simplified version of osm2pgsql.style to reduce the number of features imported into the database.

These 3 lines were retained, but most other tags were set to be deleted, rather than imported.

I intentionally limited my analysis to amenity, shop, and leisure tags.

Due to using my SSD instead of memory for the import, the whole process took around 6 hours. I just let it run overnight, so this wasn't a huge issue.

Even with this reduced set of tags, the database still took up 25 GB of storage, much more than could fit in memory.

Now that the backends were set up, I could begin writing the code to measure walkability. My code was intended to do several things for each city we want to measure:

Getting the City Boundary Data

To find the boundaries for US cities, I downloaded a few different datasets for cities:

I then created a PostGIS table, city, to store the GeoJSON boundaries for these 100 cities using a python script:

This allowed me to query whether or not a point is inside a city with the SQL query:

I wanted to generate an even distribution of points across a city and sample "walkability" at each of these points. Then, all samples could be averaged out.

To accomplish this, I calculated the bounding box for each city, and generated a Poisson disk sampling3 of points. This distribution guaranteed minimal overlap of points being sampled.

This bounding-box distribution for New York City looked like this: 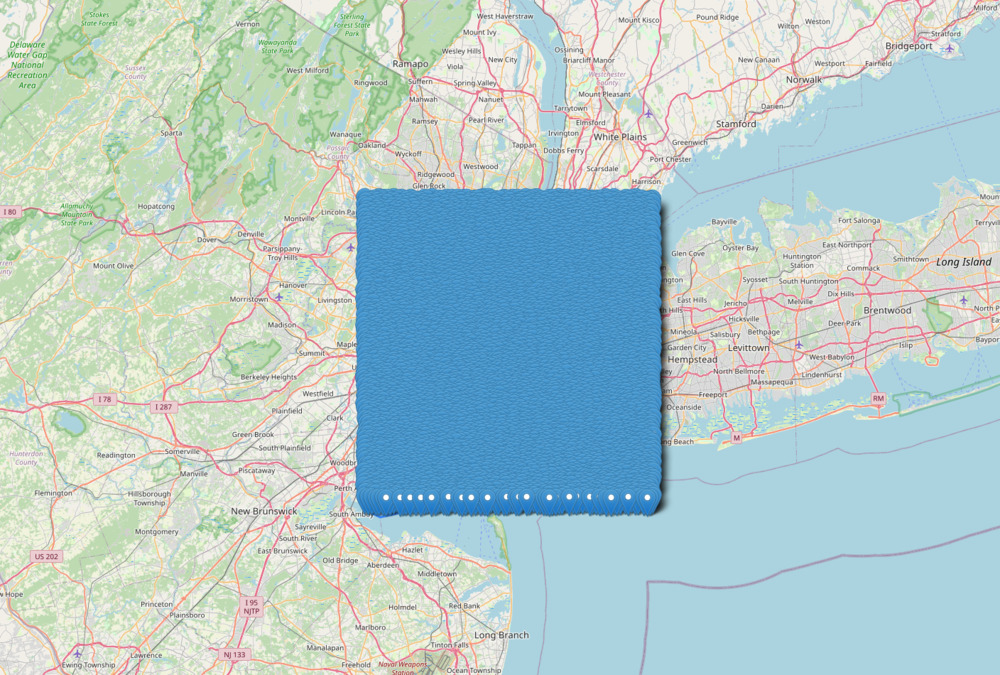 After removing the points outside of the city's actual boundaries, the sample looked like this: 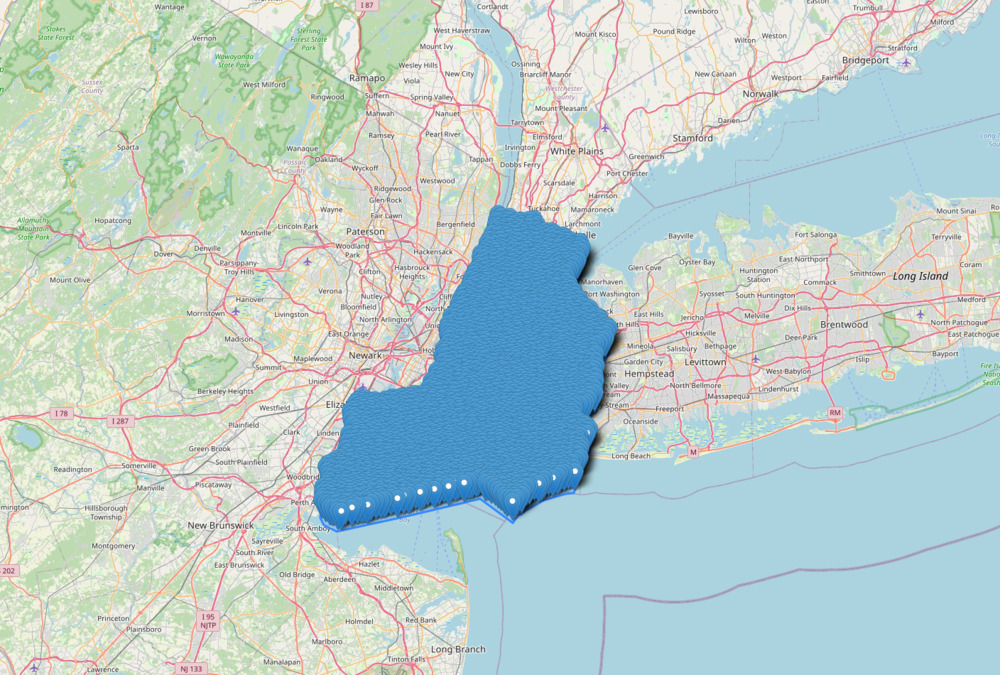 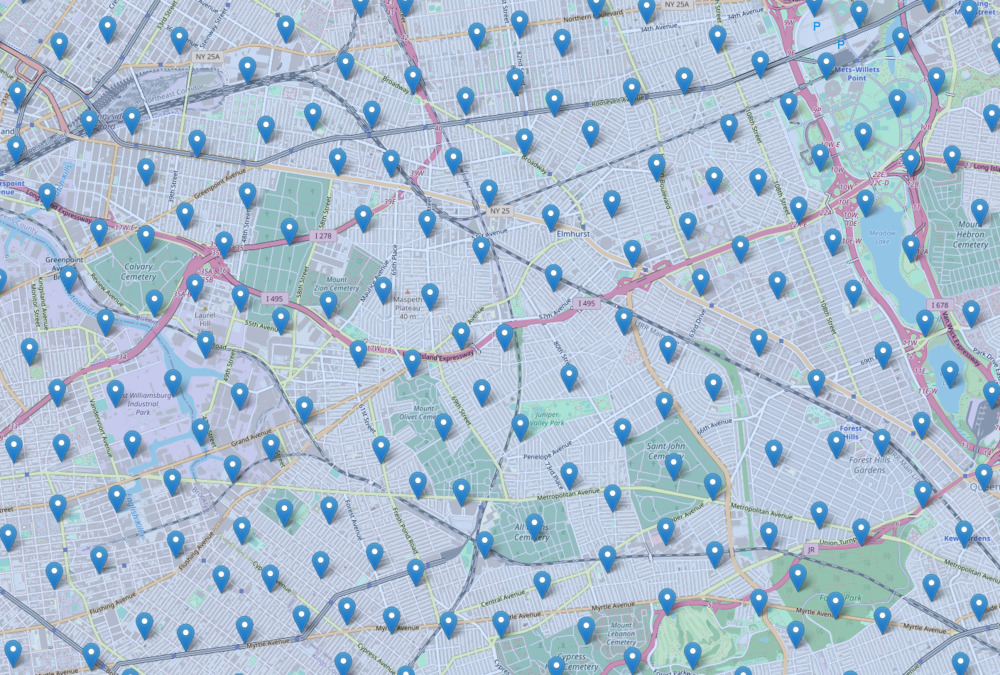 Poisson disk distributions guarantee a minimum separation distance for all the points. I picked a distance somewhat arbitrarily that would have some overlap of walkable amenities for neighboring samples, but not too much.

The code to do this was also fairly simple, relying on a library poisson_disc 4 to calculate the sample points, and PostGIS to determine whether each point was in the city.

Now that I had a sampling for the city, I needed a metric to calculate for each point.

I used a relatively simple approach: I examined a few categories of urban amenities and gave 1 point to each unique category of amenity within a 15 minute walking distance. The walking distance was determined by querying Valhalla for each sampled point.

For instance, a point with 3 restaurants, 2 bakeries, and 1 shoe store within walking distance would get a score of 3: 1 point for each category. I reasoned that most amenities are essentially a binary category. Either the amenity you want is within walking distance or it's not. For future work, I would probably change this to a logarithmic or logistic function to reflect diminishing returns on amenities of the same category.

It was also simpler to examine these categories at a binary level because the OSM data model has many places where a single entity would be represented as multiple nodes (i.e. a building polygon), and this approach avoided that complexity.

15 minutes was chosen somewhat arbitrarily, but is about the maximum I would consider to be a "quick walk" to a destination. In the future, this could be explored using variable distances per amenity.

I created a function get_amenities(lat, lon) to retrieve the amenities within walking distance of a point.

The amenities considered here are represented in the following OSM tags, including their definitions from the OSM wiki.

I also compared these rankings to Walk Score, and found that they seemed to be mostly in the ballpark. 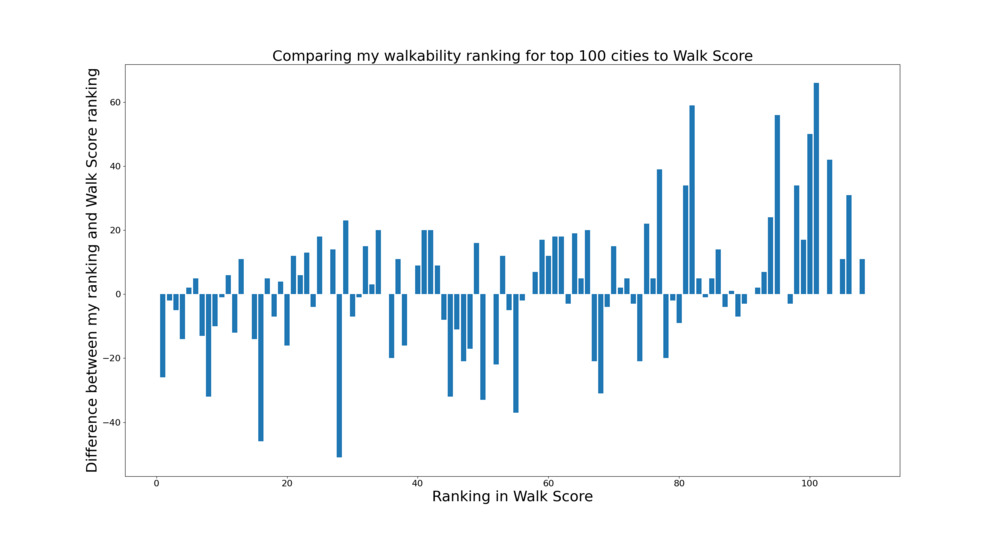 This plot shows the difference between the Walk Score ranking and my ranking. E.g. I ranked San Fransisco as #26, but Walk Score ranked it at #1, showing a bar at -25 for the first entry. The x axis is ordered by the walk score ranking.5

I profiled running this on a single city with flameprof6, and found that the majority of time is spent between querying Valhalla and querying PostGIS, which makes sense to me. Both Valhalla and PostGIS are most likely heavily optimized already, so the only way I could shave down runtime would be to sample fewer points.

Explore customized walkability scores. "Walkability" based on all amenities is painting with a broad brush. Most people probably don't care about every single amenity that can be categorized. Peter Johnson has an interesting article7 about reverse engineering the Walk Score, which found that it's highly correlated with the number of nearby restaurants.

Personally, I love restaurants, but I cook most of my meals at home, so this score may be less useful to me. I like the idea of assigning weights to each amenity to get a more custom optimization. You could even optimize for something like "most walkable Chinese restaurants" or "most parts".

We could also codify some other factors with walkability related to the isochrone calculations. For example, people with disabilities may have an especially hard time with poor sidewalk infrastructure. I don't think Valhalla supports custom sidewalk cost penalties related to width, sidewalk condition, or curb cuts, but I would be interested in exploring that more specifically.

One of the coolest things about openstreetmap is the level of detail available in the data. I don't know of anywhere else where curb cut data is available.

Another idea I had was instead of sampling a bunch of points, which requires a lot of isochrone calculations, instead calculate isochrones starting from each amenity. Then we could combine all the isochrone polygons and calculate what portion of the city is within X minute walk of that amenity. This could also be useful for finding amenity "deserts", like food deserts, but more general.

This would also allow me to explore varying the walking distance for each amenity category. E.g. I would be more willing to walk further for infrequent and important errands, like electronics repair or a hospital visit. But for more common tasks like getting groceries, I would prefer a closer walk.